Wolf Blitzer is a Moron 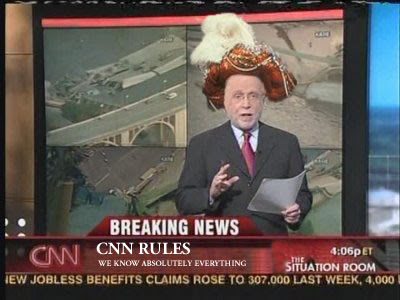 This is so last week, but since I did the online audition, and usually get at least 75% of all questions right while watching it on TV (except the physics stuff), I was particularly happy to see that fraudulent media whore and rightwing fistpuppet Wolf Blitzer was proven to be a complete and utter moron in an episode of Celebrity Jeopardy.

And the CNN Situation Room host sucked. He didn't know where Jesus was born. He thinks Julia Childs wrote Mastering the Art of French Cooking. He was just not good at Jeopardy.

It doesn't help that he was playing against Jeopardy wizard Andy Richter, who handily won $68,000 for the St. Jude Children's Hospital, but Dana Delany was there too and she didn't end the Double Jeopardy round thousand of dollars in the hole.

Even better: The Tonight Show aired scenes from the show rehearsal, where you can see Wolf being even dumber and also weirdly rude and pretentious. What this guy has to be pretentious about is anybody's guess.

I mean, he was more stupid than Sean Connery on the Saturday Night Live parody sketches.

Gawker has a bunch of videos. Watch 'em there. I hate embdding YouTubes on my blog.