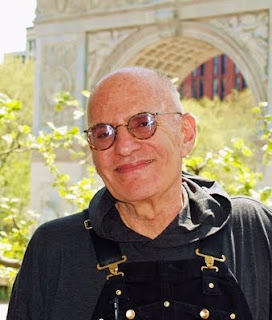 Larry Kramer, the godmother of all contemporary gay activism, was a grand marshal at the Dallas, Texas LGBT Pride ceremonies. Here is his speech, courtesy PageOneQ via veteran journalist Rex Wockner, in its entirety, because it's Larry.


We must never forget that everything we have won can very quickly be taken away from us. We have seen this time and again. Presidents come and go ignoring us. This president is no different. Once again he is not doing it for us and once again we are letting him get away with it. This President is another loser for us and I predict he will remain this way.

We have not learned to fight back with the same fury with which they fight us. You do not get more with honey than with vinegar. There are over one thousand benefits from our government that straight couples get that we are denied. This is not freedom. This is not equality. America's Bill of Rights says we are meant to be equal.

You must know, we must never forget, that every single treatment for hiv/aids is out there because of gay aids activists, led by ACT UP chapters across the country and Project Inform in San Francisco. They did not come from the government. They came because gay people fought like tigers and screaming banshees to get the system that hates us deliver them to us. If you want to read how we did it get my book The Tragedy of Today's Gays. This achievement, the obtaining of these drugs, I believe to be the single greatest achievement gay people have accomplished in all of history and we must be remembered for it.

We get what we fight for. And we are not fighting. Every single one of us is not fighting. They fight better than we do. There is a concerted and never ending vein of hate in this country and in this world dedicated to keeping us in our place. It is evil to force people to be what we are not -- free. We are not free.

I love being gay

How can I say this without offending everyone else, I think we're better than other people.

I think we are smarter.

I think we are more talented.

I think we are more aware.

I think we make better friends.

I think we make better lovers.

I think we're more tuned in to what's happening, tuned into the moment, tuned into our emotions, and other people's emotions.

Yes, I think that gay people are better than other people.

I think the only thing we are not so good at is fighting back.

And I passionately and desperately want all my brothers and sisters to stay alive and well and on this earth, with total equality with every straight person.

Being gay is the most important thing in my life.