This clip has had nearly 3 million views worldwide. Julian Shaw, the guy in the video, is not only cute, but an accomplished filmmaker.
Posted by Jim Provenzano at 11:05 AM No comments:

Posted by Jim Provenzano at 9:29 PM No comments: 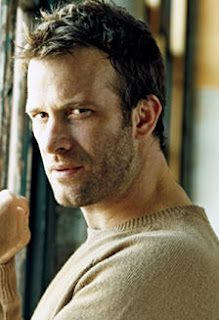 My second interview with Thomas Jane!

(The first one never got published because I misplaced the cassette with my interview after a screening of Stander in 2009. D'oh! I found it later, but here's the new one).

Taking a break from his role as a male hustler on the HBO series Hung, Thomas Jane will be at the Castro Theatre this Friday for a rare screening of his 2009 directorial debut, Dark Country, a noir-horror 3D thriller in which he also stars.

Jane shared his lifelong appreciation of the noir and horror film genres in an interview with the Bay Area Reporter.

"As a first film, I wanted to explore some of the things that inspired me to get into movies in the first place," said Jane in a phone interview from Los Angeles. "I used to watch The Twilight Zone and The Outer Limits on TV as a kid; Saturday matinee movies, EC comic books with the twist ending; they heavily influenced me as a young man. So I wanted to tackle something that would pay homage to that. Dark Country also merges horror with noir, another genre I love. As a teenager, my other friends were listening to Wham and Prince while I was reading Dashiel Hammett." 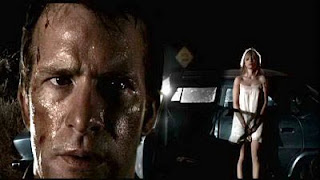 It was at that time that the young high school student and aspiring actor was swooped up from his Bethesda, Maryland upbringing by a roving Indian film crew. At 16, Jane starred as the non-Indian male romantic lead in the odd 1987 film Padamati Sandhya Ragam that is viewable on YouTube.

"I played myself at 16 and 40," said Jane. "They put a wig and mustache on me and I phonetically learned Telegu (yes, that's Jane speaking his own lines, although they're often dubbed)."

Living in India for half a year, Jane traveled around the United States with the film crew in vans and RVs on a guerrilla filmmaking trek. He recalls the difficulties, wonderful meals and camaraderie of the project, calling it "one of the most formative experiences of my career."

READ MORE at www.ebar.com
Posted by Jim Provenzano at 11:08 AM No comments: 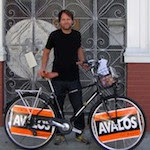 I was going to consider an essay about how pro-cycling (which means cyclists who obey laws and commute) is the new "kiss a baby" for local politicians. But most of them are sincere and not just posing for photos, although they do pose for photos!

The article linked below pretty much embodies the political + cycling aspect I've been focusing on since I started this blog in 2007. 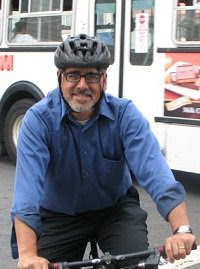 For Modern Luxury.com David Darlington goes on bike commutes with cycle-pal politicians John Avalos and David Chiu (both running for mayor of SF).

Darlington explores the increasing political clout of the San Francisco Bicycle Coalition, compares street improvements over the past years, and frames it to show how interim-mayor Ed Lee's braggadocio about "getting it done" is really just leftovers from the Gavin Newsom administration. 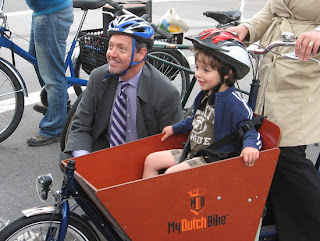 Basically, Avalos and Chiu, along with Mirkarimi, are the most authentic cyclist-politicians of the lot for this week's elections. Avalos even has a cyclist contingent of supporters.

Along with gay and smart Bevan Dufty, who also supports a greener city, you can pretty much figure out who I'm endorsing this year. Dennis Herrera's nice, too, but it's odd with ranked choice, even more of a issue-specific popularity contest.

This is particularly notable: 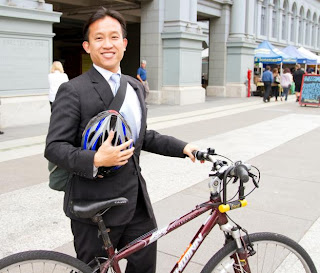 "Chiu, president of the San Francisco Board of Supervisors, is running for mayor. On a bike-advocacy platform. Fourteen years ago, this would have been unimaginable. In 1997, when mayor Willie Brown authorized the arrest of riders in Critical Mass—the infamous monthly bike mob that had been blocking intersections, tying up rush-hour traffic, enraging drivers, and creating a serious cultural flash point—supervisor Michael Yaki declared that “no proposal may be deemed too extreme in controlling bicycles in San Francisco.”

And Ed Lee is basically the puppet of that Mr. Brown. I have no idea what happened to Yaki, nor do I care. He had no idea then or now, how to handle cycling in Sf. 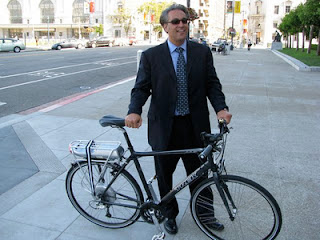 Fortunately, the San Francisco Bicycle Coalition does, as noted in Darlington's article:

"The nation’s biggest metropolitan cycling lobby, 12,000 members strong, the coalition is one of the city’s most influential grassroots groups and its largest deliverer of programs on bike safety and parking, transit access, and road infrastructure. Since its beginning 40 years ago as a ragtag collection of bike nuts and green freaks, it has matured enough to enjoy a full-frontal embrace with city hall: Last month, 14 of the 16 major mayoral candidates submitted to its quiz on cycling issues, and the organization’s relentlessly upbeat executive director, Leah Shahum, has served on the board of the all-powerful Municipal Transportation Agency. Not coincidentally, the MTA now has a “holistic” division called Sustainable Streets, whose policy aim—according to the agency’s deputy director of transportation planning, Timothy Papandreou—is to make cars “residual.”

Vote green. Vote on wheels. Check out the SFBC's endorsements, and make your own decision(s), after watching this video:

Posted by Jim Provenzano at 12:46 PM No comments: