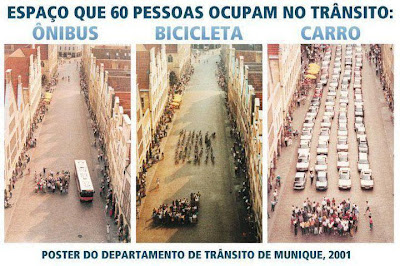 Article: We're #1! San Francisco named the best of Best Cities to Live in Car-free
Posted by Jim Provenzano at 5:34 PM No comments: 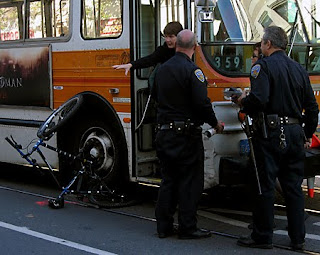 MUNI is known for its temperamental and irresponsible drivers. Here's another (SF Examiner):

A Muni bus operator rolled over the arm of a San Francisco bicyclist last week, only to then drive away without stopping.

Nob Hill resident Laila Brenner was cycling home from work on Sept. 14 when she changed lanes to avoid a double-parked car and subsequently tangled with a bus near the intersection of Columbus Avenue and Broadway in North Beach, all parties agree.

Brenner’s bike crashed to the ground, and the back right tire of the bus rolled over and crushed her arm, her attorney Doug Saeltzer said. While Brenner lay injured, the 8X-Bayshore Express then sped off.

Muni spokesman Paul Rose said his agency has reviewed the footage captured by cameras at the Roaring 20s club. He said it is unclear whether Brenner crashed due to the actions of the bus, or because of the illegally parked vehicle.

But Saeltzer quarreled with the agency’s findings, saying the bus was “way too close” to Brenner.

“We just can’t understand how an operator can literally run over somebody and not stop to check it out,” said Saeltzer, who is planning to file an injury claim with The City. “A professional driver should know if they hit someone.”

I've had (knock on wood) no dangerous interactions with MUNI buses, mostly because I give them a wide berth. Passing double-parked cars is the scariest thing. MUNI bus drivers foten tap their horns politely when approaching a cyclist. Sometimes, they don't. It's a daily risk urban cyclists face.

The photo is from a different bike vs. bus accident in SF.
Posted by Jim Provenzano at 8:18 AM No comments:

Have a Pleasant & Safe journey 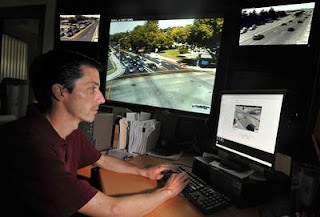 The Mercury News reports on a new high-tech method that makes intersections safer for cyclists.


Pleasanton is the only city in the nation using a new radar-type device to make street crossings safer for bikers. The city began testing the "Intersector" -- a microwave motion and presence sensor -- for that use in January 2010 at one of its 104 signaled intersections. The device monitors the intersection and can differentiate between vehicles and bicyclists crossing the road and either extends or triggers the light if a cyclist is detected.

"I would like to think we are bicycle-friendly," said Joshua Pack, Pleasanton's senior transportation engineer. "We are not actively yelling and screaming that we are doing it, but behind the scenes we are."

The results from the test run, at Foothill Road and Stoneridge Drive, went so well that the city installed the device at six other intersections and has plans to add four more.

Since it began using the Intersector, the city has received calls from at least 20 other jurisdictions, from some in the Bay Area to as far away as Memphis, Tenn., that want to know how the experiment is going.

"It's nice to feel acknowledged and recognized," said Jim Ott, a Pleasanton resident and cyclist. "Before (the light) didn't give as much time, so you had to cycle harder to make it. You also didn't want to get caught in the middle. And, if the light didn't trigger, you were a sitting duck for folks to bump into."

"Pleasanton is doing some great things," said Renee Rivera, executive director of the East Bay Bicycle Coalition. "It is getting more bike-friendly all the time."

How pleasant!
Posted by Jim Provenzano at 10:20 PM No comments:

Sounds pretty neat, considering what a dangerous place it is to ride in.
It's not without its share of controversy and problems, though.

"The city has been in the thrall of a bicycle backlash for the past year, after the city’s Department of Transportation ran lanes through the East Village, Upper West Side and, most controversially, along Prospect Park West, which led to a lawsuit filed by neighbors living on the thoroughfare."

There's also a concern with an economic feasibility, despite several other cities having done well with such programs.

"Concerns have been swirling in the city about a bike share program, particularly after The Times published a story in June pointing out that Montreal’s Bixi system, in which Alta is a partner, had been losing money and had to be bailed out by the city for more than $100 million."

Well, take it from me, Montreal should never be used as an economic model. Outgames $5 million debt, anyone?

Funny; when I lived in New York, they already had a bike share program. It was called Theft.
Posted by Jim Provenzano at 5:56 PM No comments:

For the past three decades, nearly every time I flew on a plane, I pilfered an emergency flight brochure. It became a minor collection of souvenirs. I thought one day I'd use them in some sort of art project for my somewhat closeted hobby of making collages.

After 9/11, like many people, I got a sad haunted feeling every time I saw the World Trade Center in TV shows and films. I began copying these clips onto a VHS tape, then a DVD. I also downloaded the horrifically ironic scene in the film 'Godspell,' where a clown Jesus and pals sing, "Yes, It's All For the Best!" from the roof of one of the Twin Towers. That scene is missing from the montage above.

As some know, I used to live in Manhattan and Jersey City in the 1980s and '90s. My ex-sister-in-law's loft on Cedar Street is across the street from the WTC, and I worked and commuted there frequently.

I even got funding for, and created, wrote and composed a musical in 1998 set in the World Trade Center's PATH station, called Under the River. Both of my pre-9/11 New York novels, Monkey Suits and Cyclizen, include scenes near, and under, the towers.

Years before PINS took shape, I first wrote the first draft of Monkey Suits on a tiny Macintosh in the loft, before I even had a computer. My ex-sister-in-law's home, which I visited weeks afterward, was severely damaged, and that itself became a serious media topic for a long time. 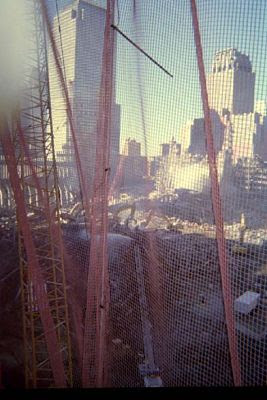 (This is a photo I took from inside the Cedar Street building.)

So, I feel a connection in my own small way. A while back, I developed a proposal for a 9/11 art installation to be put up somewhere during September of this year. I submitted it to a few galleries (they succinctly rejected it) and it was accepted to be part of a local arts festival which I no longer care to mention by name. I dropped out for various very unpleasant reasons.

Then I noticed that the window installations at the Little Roxie had a few upcoming vacancies. They liked my pared down much smaller version of the concept. I began to collect the additional materials.

After a minor setback with installing it, last Saturday, I spent four hours putting it together while hearing the audio for the film Shut up, Little Man! playing from the nearby projection booth.

But then the electrical outlet malfunctioned. The management has been very nice in attempting to accommodate the problem, but it mostly won't be seen lit up at night, which completely defeats the purpose of the installation. The collected clips were converted into a looped DVD, which is supposed to glow upward to the string-fabricated "twin towers," which, below, are surrounded by "buildings" composed of most of those collected flight brochures. 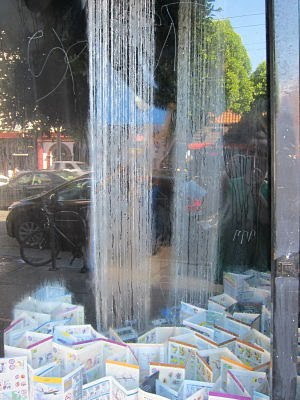 It's kitschy, tiny, and only deals with a minor aspect of this entirely overwhelming event, one which has changed our lives, and destroyed so many others.

I still have yet to get a good photo of it at night, when the security gates aren't covering up the window.

Stop by and check it out, through September. Or, like most of the deranged homeless people and partying drunks along that messy little block will probably do, ignore it completely.
Posted by Jim Provenzano at 3:18 PM No comments:

Danny Macaskill - Industrial Revolutions
Posted by Jim Provenzano at 10:05 AM No comments: 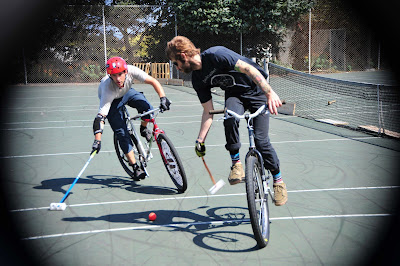 Well, here's another item that warms the cog-gles of my heart. Bike polo? Yes, bike polo. I can't believe I didn't remember that this exists, since 1891, in fact. 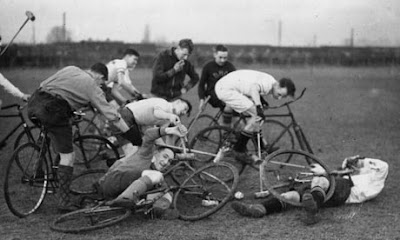 Here's a photo of a cycle polo match at Eastleigh, 1938 (source: Guardian UK).

In addition to global competitions, the US version is going strong. San Francisco also has its own league.

Mike Shriver (who took the two cool color photos, among many, many others) told me that three San Francisco teams are playing in the World Championship tournament this weekend in Seattle.

While it looks like a lot of fun, something about crashing into other players, or flipping over if a mallet got caught between the spokes, leaves me knowing I'll remain an observant fan, but not a participant.

If you're feeling daring, join the Facebook group to find out where to play. 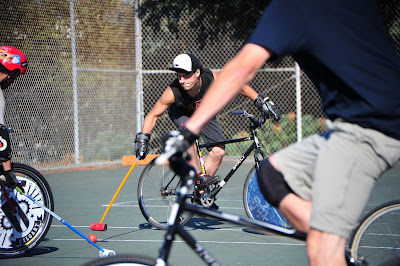 Here's a video from 2007 of New yorkers getting into the game.