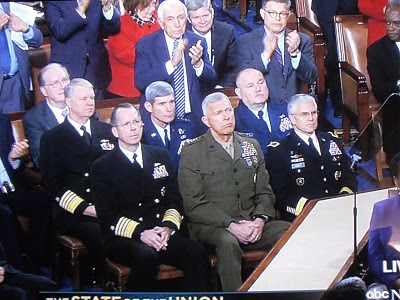 President Obama may have purposely timed his State of the Union address on the same day as the San Francisco unveiling of the new iPad. He's regenerating himself, although, from what I heard, it was a lot of campaign jargon and rhetoric.

Obama did make sure not to schedule his SotU (that's how the acronym should be spelled, but does anyone listen to me?) speech during the season re-premiere of the last season of LOST (which is not an acronym, but people seem to always spell it in all-caps). The last thing he would need is a herd of devoted LOSTies breathing down his neck, or something.

THE moment for us gays, as predicted, was his announcement about repealing Don't Ask Don't Tell. That was met with a chilly reception by the evil alien replicants who pretend to be the Armed Forces Cabal of the U.S. 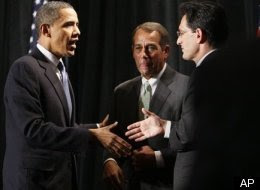 The rightwing ho's had to step down and cower, apparently, under Obama's scold session at a House Rethug Retreat in Baltimore.

"White House officials told the Huffington Post the (Obama team) were absolutely ecstatic. MSNBC's Luke Russert, who was on the scene in Baltimore, relayed that a Republican official and other GOP aides had confided to him that allowing the "cameras to roll like that," was a "mistake."

Yes, it's the same as the bovine NOMnut Maggie Gallagher (who has a bastard child yet bleats about the sanctity of marriage) claiming that even the potential for televised court trail on Prop 8 scared away her "strong" defense witnesses. Oh, please.

Suddenly, at their convenience, Rethugs want media censorship when it suits them.
It's amazing how a fat cow who spawned a bastard leads the fight for "traditional marriage," and that the top ranking soldiers who relentlessly attacked two countries and occupied them so obviously fear a few thousand homos.
Posted by Jim Provenzano at 3:23 PM