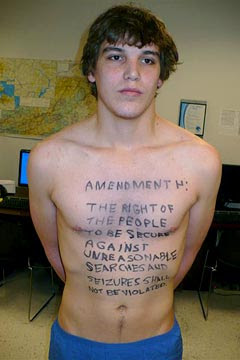 Read about Aaron Tobey, who was arrested by TSA airport thugs for raising concerns about the 4th amendment. Seems the TSA doofs didn't care for his stripping down and displaying the fourth amendment written on his chest.

"Aaron Tobey's dramatic strip-protest is one of the latest in a series of stunts by American travelers fed up with airport security procedures some consider too invasive. A YouTube video of a California man's airport security pat-down, in which he warns the agent not to "touch my junk," went viral last year. John Tyner's infamous quote has been made into T-shirts and bumper stickers and even became the colloquial title of proposed legislation, the Transportation Security Administration "Don't Touch My Junk" bill.

The Constitution's Fourth Amendment outlaws "unreasonable searches and seizures." Tobey, a 21-year-old University of Cincinnati architecture student, had those very words scrawled across his chest and abdomen when he stripped down to his underwear at a Richmond, Va., airport back in December. He was heading to his grandfather's funeral at the time. Tobey was arrested and cited for disorderly conduct.

The misdemeanor charge has since been dropped, but Tobey is still suing. The defendants listed in his legal filing are Homeland Security Secretary Janet Napolitano, the head of the U.S. Transportation Security Administration, the Richmond airport authority and several security officers there. He's seeking $250,000 in damages and reimbursement for legal fees.

Personally, I'm boycotting airlines altogether until this fascist baloney is done with. I was hoping to go to Hawaii soon, but seeing as it'll be coated in a radioactive cloud soon, I might not even take a boat.
Posted by Jim Provenzano at 12:28 PM No comments: