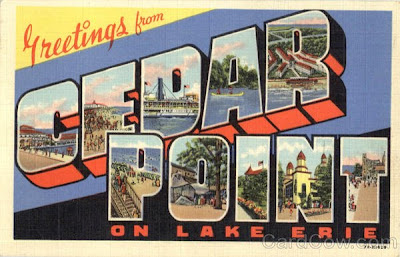 Tea Partiers: Why don't those who oppose Obama just come out and state the real reason for their venom:

"We don't take orders from a Negro!" White people can't stand that a black man is giving them directives. That's all this is about. Their hatred of black people.

Why do the media pretend it's about something else?

At least the FBI isn't pretending it's something else:

The FBI was conducting raids Saturday night at multiple locations in southeast Michigan, Indiana and Ohio.

At least seven people, including some from Michigan, have been arrested in raids by a FBI-led Joint Terrorism Task Force in Michigan, Ohio and Indiana as part of an investigation into a Christian militia group, according to a this report from DetNews.com.

The suspects are expected to make an initial appearance in U.S. District Court in Detroit on Monday.

On Sunday, the FBI confirmed that federal law enforcement agents were conducting activities in Washtenaw and Lenawee counties over the weekend in connection to Hutaree, a Christian militia group. FBI Special Agent Sandra Berchtold told The Detroit News the federal warrants in the case are under court seal and declined further comment.

Sources have said the FBI was in the second day of raids around the southeastern Michigan city of Adrian that are connected to a militia group, known as the Hutaree, an group whose members describe themselves as Christian soldiers who are preparing for the arrival and battle with the anti-Christ.

Agents have also obtained search warrants and multiple arrests have been made. 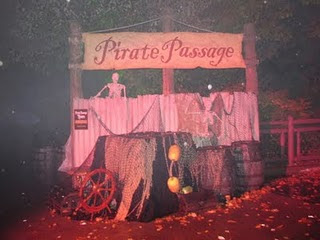 A second raid was conducted in Huron. An FBI agent at the scene of the Bayshore Estates raid said a second, related raid was taking place at “another location.” Huron police confirmed late Saturday a raid had taken place in that city, but would say nothing more.

Sandusky, Ohio?
Wow. Who woulda thought the home of Cedar Point would be a terror hub.

Well, anyone who's lived there.

I remember best the little train ride you took at Cedar Point, through Frontier Town, which was basically a bunch of prop western exteriors with wire-controlled skeletons in western gear (amazingly I found a pic online). It was odd, not being scared in the woods in the middle of an afternoon by gun-shooting skulls.

My favorite was the upside down house, which had traditional amusements; funny mirrors, tilted walkways, etc. Great fun.

So, I wonder how many of these homegrown terror suspects ever enjoyed a nice day at the park?

That might be the problem. Too much rightwing homeschooling, not enough fun. 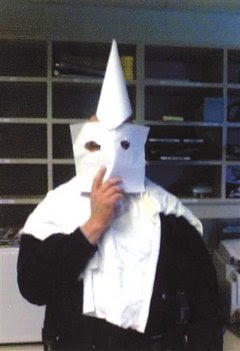 Oh, and I found this related 2-year-old gem quite by accident:

SANDUSKY, Ohio (AP) -- A highway patrolman who was photographed in a handmade Ku Klux Klan costume while on duty the day before the Martin Luther King Jr. holiday has been suspended without pay, authorities said.

She told ya so 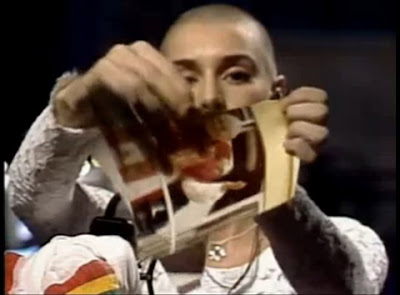 Sinead O'Connor was vilified for defying two thousand years of bullshit when she tore up a photo of a pope.

Now, she's calling for a full criminal investigation against the Vatican. O'Connor in the LA Times:

Scary? What's really scary is that no one has yet done just that.
I don't want them on their knees, unless it's behind bars.
Posted by Jim Provenzano at 11:12 AM No comments: 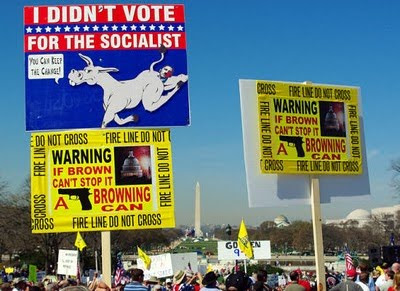 Like a giant toxic kidney stone, the Healthcare bill passed.

Reichwing losers (particularly one in a recent presidential election) are already threatening to repeal it.

Of course, it's been gutted of abortion services, except in emergency purposes.

It's been gutted of LGBT inclusion, so if your GLBT partner is hospitalized, you still have second-class rights, or none at all. Yet the Human Rights Campaign supports it.

But to criticize it is to possibly be dumped in the camp of lunatic hordes who invaded the Capitol Building mall and tried to riot inside. they closed the building (the same as any other large protest would induce), yet reichwingers are few yet furious in their ire.

A few hundred total wackos, some screaming racist and homophobic epithets, others using signage of assassination threats, another actually Tweeting about it, and another pasty-faced white man shouting "Baby-killer," this time a congressman.

It's ugly, watching the rightwing unravel.

" I will make a concerted effort emhance my personal wealth by scaming the system. That will become the national passtime. And by the way. JUST WATCH for whats comming down the pike. BEFORE THE NOV. ELECTION. Amnesty, & energy (cap and trade), they have to pass this fast to complete the takeover. My God help us all."

Why are they so upset? It pleases the health insurance lobbyists, who paid off the rightwing and Blue Dog Democrat politicians to start those horrid shouting matches at town halls.

But if it's perceived as a victory for President Obama, fine.

Let's move on.
Posted by Jim Provenzano at 5:38 PM No comments: 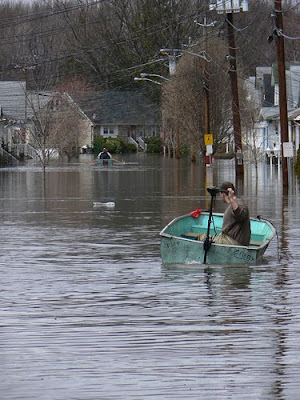 More than ten years ago, my first novel, PINS, was published. Set in the real New Jersey town of Little Falls, its name embodied one of the many metaphors in that book.

In my expansive research, I bought and studied topographical maps, received promotional material from the town council (and a supportive note), and even visited a few times (once after moving to California while attending a nearby family event), stopping through to take photos of buildings and homes which became the model for several settings.

For the cast and crew of the 2002 premiere of my commissioned stage adaptation of PINS, I bought Little Falls memorabilia as gifts. 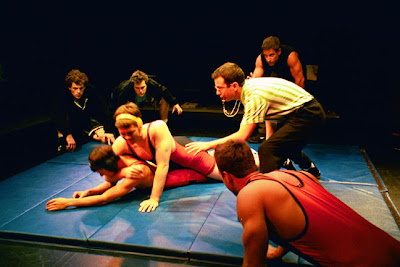 While I changed some names to other fictional titles, I felt like I'd a sense of the reality of life in that town.

So it was with an especially unusual bit of sadness that I saw one the news that Little Falls, along with many parts of the Eastern tri-state area, had been devastated by the floods from recent harsh winter storms.

Trees sliced through homes like a scene from Donnie Darko, and even killed a man. A tree.

May the people of the East recover from the natural (or climate change-induced?) devastation. This also happened two years ago, and several times before that.

Or else they're just too stupid for not moving or stopping it from happening, despite a report LAST YEAR telling them they should build levies.

Oh, New Jersey. Thanks so much, ya big dope.
Posted by Jim Provenzano at 5:41 PM No comments:

Pope on the Ropes 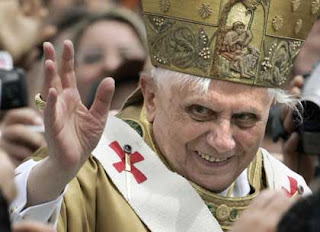 Why is anyone surprised?

"The Pope was drawn directly into the Roman Catholic sex abuse scandal last night as news emerged of his part in a decision to send a paedophile priest for therapy. The cleric went on to reoffend and was convicted of child abuse but continues to work as a priest in Upper Bavaria. The priest was sent from Essen to Munich for therapy in 1980 when he was accused of forcing an 11-year-old boy to perform oral sex. The archdiocese confirmed that the Pope, who was then a cardinal, had approved a decision to accommodate the priest in a rectory while the therapy took place. The priest, identified only as H, was subsequently convicted of sexually abusing minors after he was moved to pastoral work in nearby Grafing. In 1986 he was given an 18-month suspended jail sentence and fined DM 4,000 (£1,800 today). There have been no formal charges against him since."

The Vatican is claiming ignorance: "The cardinal could not deal with everything..."

Nazinger's chief exorcist blames it on demons in da house! 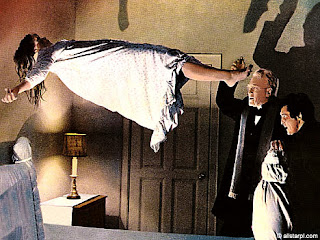 How much longer will naive Catholics belive the lie that this is a holy man?

Soon, soon, the Vatican will be a shopping mall.
Posted by Jim Provenzano at 12:48 PM 1 comment: 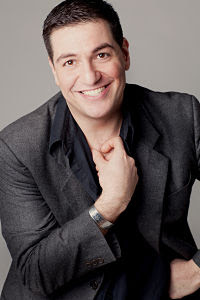 What's funny about being from a country whose dictator denies you even exist?

For gay Iranian-American comic Mehran Khaghani, humor is the best weapon. He'll be performing in There Are No Gays in Iran at Café du Nord, Friday, March 12, with straight comics Amir Malekpour, Tissa Hami and Max Amini, who each dispel myths and muses about their culture through humor.

So, Khaghani is asked, what is funny about dictatorial oppression?

Khaghani has a few nicknames for Iranian president Mahmoud Ahmadinejad, who publicly declared that Iran has no homosexuals. A favorite: Napoleon II: Electric Boogaloo.

"He's basically a midget who's getting away with it," Khaghani said. "He's gotten in bed with the right people; he's essentially blown the status quo to get where he is. This guy isn't some revolutionary thinker, but smaller. He's like a fifth-generation asshole, donning Men's Wearhouse jackets so he can seem like a man of the people."

Get more info on the show.
Posted by Jim Provenzano at 9:40 AM No comments: 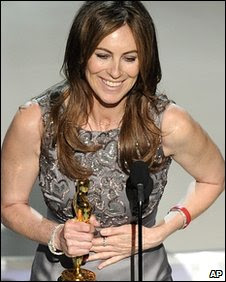 Being a writer, I always gravitate to the Best Sceenplay nominations. That "The Hurt Locker" won is fine, but that the writer exaggerated and completely fictionalized the work of bomb squad personnel to make a faux-war-critique film that's actually pro-war propaganda, didn't please me.

The fact that I was at an Oscar party where thousands were raised for AIDS-HIV and other nonprofits, was fine. But seeing the usual status quo winners wasn't.

That "The Hurt locker" won the Best Director to a woman, Katherine Bigelow, over billion-dollar director James Cameron, was remarkable.

But the Academy is basically a bunch of old out of work actors who resent CGI characters. Despite "Avatar"s global phenomenon, and "The Hurt Locker"'s relative obscurity, it's fascinating to see the underdog win among the blockbusters.

I still have yet to see more than 3 of the 'Best Picture' nominated films. So who am I to complain?
Posted by Jim Provenzano at 9:41 PM No comments: 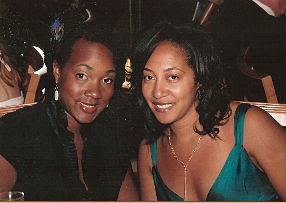 (photo: Aisha C. Mills and Danielle A. Moodie were the 11th couple in line this morning to obtain a marriage license in Washington, D.C.)

Washington, D.C.'s marriage equality legislation became law in spite of a Herculean effort by opponents to block its implementation through both legal action – including a last minute Hail Mary pass to the U. S. Supreme Court and Chief Justice John Roberts for a stay – as well as legislative maneuvering in the House and Senate.


Read the Bay Area Reporter article.
Posted by Jim Provenzano at 10:49 AM No comments: