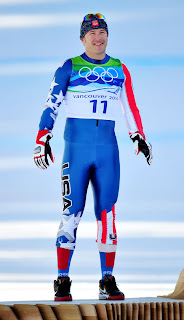 After being asked for the fifteenth time if I'm watching The Olympics, I had to bluntly say, "No! It's boring! I hate corporate sports without a gay subtext, or in Johnny Weir's case, flagrant subtext!"

Really. Yet another snow bunny does a loop de loop? Figure skating is STILL flamingly homophobic and fixing results?

The Quebec Gay and Lesbian Council has demanded a public apology from French-language broadcaster RDS after one commentator said Weir hurts figure skating's image and another said Weir should be made to take a gender test. The remarks were "outrageous" and "homophobic," CQGL said in a statement on its website.

Don't forget the out gay former figure skater who did even worse during Weir's 2007 competition.

Enter the 21st century, you relics. Actually, I have caught some nice moments via recorded bits online. Take Johnny Weir's response; as good a "Pokerface" as his number! 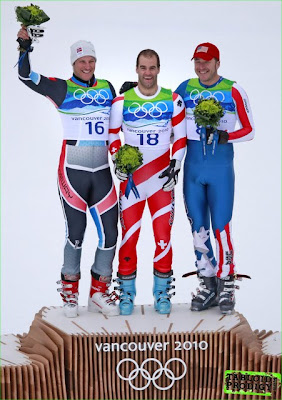 But it is nice to see some happy athletes, like Bode Miller, who dresses right nicely at the awards podium, showing his happiness and practically bulging with pride. Isn't this the guy who got hassled for smoking a joint? 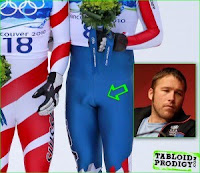 But really. Aren't there more important things to pay attention to?

Don't Ask Don't Tell and its supporters get a trashing on Media Matters.
Enter the 21st century, military.

Maryland will recognize gay marriages from elsewhere.
Thanks, Maryland, for entering the 21st century. Asshat Newt Gingrich: "Obama is a Socialist." Back to the 19th, for you, gramps. And take your freak show CPAC circus with you.

But most important, Betty White's on her way to getting a host slot on Saturday Night Live!
Posted by Jim Provenzano at 8:38 AM