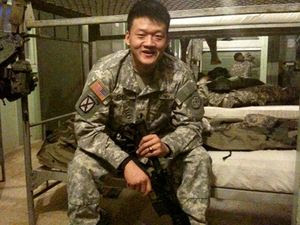 The only out gay military personnel who's also been named Grand Marshall for New York City's Gay Pride March. (via JoeMyGod)

Dan Choi himself writes: "I was never fully discharged and have been substituting drills because of my schedule of lobbying and pushing for repeal. I attended national guard duty this past weekend beacuse we needed to train on critical skills for a possible upcoming deployment. My discharge is still pending, but I have returned to work - and there are no instances of decreased good order or discipline. I sleep in an open bay with little privacy. No issues. Good to be back with my unit! - although I can still be fired at any moment for DADT." -- via Towleroad.com

So now, in the midst of his possible return after becoming globally famous for his position, let alone his eloquent speaking about his situation, and that of hundreds of thousands of lives on the line, being debated in the rightwing Senate like so much spoiled cheese.

Hopefully, his requisition for time off in late June is approved, because he's got a parade on schedule, according to Q New York:


This past Monday, February 8th 2010, at a meeting of NYC Pride (aka Heritage of Pride) it was announced that Lt. Dan Choi would be one of the Grand Marshals for the 41st Annual LGBT Pride March, which will occur on June 27th, 2010. When first approached about the request to be the NYC Grand Marshal, Lt. Choi responded with resounding excitement and a sense of honor for all who have struggled under this policy. Lt. Choi’s selection and acceptance of the honor of NYC LGBT Pride Grand Marshal marks the first time in U.S. history that an openly gay male on active service with the U.S. Armed Forces will be an LGBT Pride March Grand Marshal.

Choi was the Grand Marshall of San Francisco's pride parade in 2009. I got to meet him and talk about this. But not an interview.

But Choi is in a unique position, to make history as a singular immediate symbol of this struggle. And if that wakes up the antigay fuckheads, I don't know what will.

Update: OMG, I just got an email from Dan Choi!

Returning to my unit this past weekend for army training was many things: invigorating, exciting, a homecoming... but overall, a reminder that actions speak louder than words.

The night before I reported for duty, I appeared on CBS, ABC, MSNBC, CNN, BBC, al-Jazeera and many other networks commenting on the testimonies Admiral Mullen and Secretary Gates gave before the Senate Armed Services Committee. One debate on Larry King Live was particularly interesting, as the anti-gay Tony Perkins rolled out his same-old fear tactics and insulted our military in front of Gen. Wesley Clark and the nation. Tony Perkins bet against our soldiers, predicting that so many people would quit we would need a draft.

During the infantry training, we proved him wrong.
Do not call any of us quitters. Gay patriots are serving openly and honestly today.

I am back with my unit, drilling and preparing for a possible deployment. However, my discharge is still pending, and any day I can still be fired under Don't Ask Don't Tell.

While some might praise the idea of "better implementation" of the law, claiming that "witch hunts," "jilted lovers," or "third party outings" are the worst part of DADT, we know that the most dangerous and poisonous part of DADT is the fact that it forces soldiers to live a lie.

Help me deliver 500,000 signatures to congress by signing the petition.

We all have a responsibility to honor our soldiers, and restore integrity by demanding the full repeal of military discrimination. Do not accept a compromise: our American values have been compromised for too long.

Okay, so it's a group email from the Courage Campaign, who are having an online discussion with Choi, and Senator Kirsten Gillibrand, whose move to cut funding for DADT discharges isn't the best move, according to others who want to go full on with the Senate hearings and their "results." But still. People are doing things at an accelerated pace.
Posted by Jim Provenzano at 10:33 AM