Times of his life 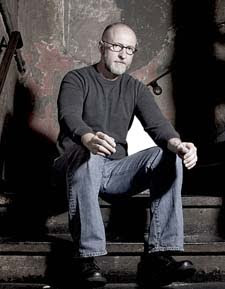 
"Growing old, it's hard to be an angry young man," state the lyrics in Bob Mould's song "Return to Dust." While the 48-year-old musician shouldn't feel old, it is fascinating to recall that he started the seminal punk band Husker Du 30 years ago, and has continued to influence cultural shifts in modern music.

His other accomplishments, including his subsequent band Sugar, an upcoming memoir, and even a brief stint with the World Wrestling Federation (as a story developer, not a wrestler), add up to a career worthy of a retrospective. But Bob Mould just keeps moving on, performing October 18 at the Treasure Island Music Festival along with dozens of other musicians and DJs. Included in his set will be songs from his latest CD, Life and Times.

When we talked, Mould had arrived in San Francisco for the September edition of Blowoff, the popular roving nightclub event Mould and musician DJ Rich Morel (Death of the Paperboy) produce every two to three months in different cities across the U.S. How does the busy musician manage a constantly roving schedule?

"We try to balance it out," said Mould. "I've also got my band doing an entire North American tour. How I worked it this time, the DC band show and DC Blowoff will be on the same night. Then we turn the house over for Blowoff in about 45 minutes. That works really well. I try to put the band shows in that schedule."

How does the audience change? Mould chuckles, then admits, "For the band shows, it's 90% straight. For Blowoff, it's 100% gay."

This balance between straight and gay fans has been a persistent duality. He continues to expand the specificity of being out in the new CD, Life and Times. One song, "Argos," includes descriptions of the cruisy, sex-filled backrooms of an Amsterdam bar. The CD's concise collection explores some of the more painful aspects of relationships, emptiness, while still keeping a rocking beat and melody.

"A while back, I was trying to put together a fictitious gay punk-rock band," Mould said, as he explained the sexual inspiration behind "Argos." "I actually did it, then I wrote some songs like 'Argos.' Nothing came of it. Then I thought, 'What the hell, I'll put it on my recor
d.' It has a sexy, fun sort of bathhouse atmosphere. I started addressing same-sex relationships in songs in 2002 with Modulate . That was sort of my jumping-off point with being not only gender-specific, but orientation-specific."

Read more at www.ebar.com
Posted by Jim Provenzano at 10:02 AM