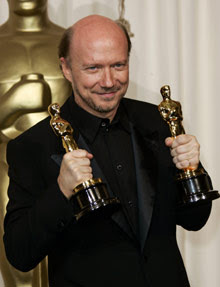 Crash director Paul Haggis has quit the "Church" of Scifitology. After 35 years in the devious controversial "religion," Haggis finally has a firm grasp of the obvious. Scifitology is evil and dumb at the same time.

Scientology-Cult.com has the story, and Gawker fills us in on the dish.

The entire letter to—of all people—creepy Church spokescreature Tommy Davis is below, but here are the highlights: Haggis has been asking the church to resign their support of Proposition 8. He registered his distaste for the church's stances on homosexuality via phone calls and letters. Davis told Haggis that "heads would roll" over this about ten months ago. Davis apparently drew up a press release he showed to Haggis, which eventually got canned. Haggis views the church's actions as "cowardly," and thus, after thirty-five years of membership, is resigning.

Furthermore, Haggis saw Davis' interview on CNN, when Davis denied the existence of a "disconnection" policy in which the church orders members to cut non-members out of their lives, as they pose some kind of negative threat towards the work of the church in members' lives.

Surprisingly, Haggis' main beef is the "church"'s stance in support of Proposition 8, which (for now) banned gay marriage in California. The media mavens are noting how well-timed (or ill-timed, depending on your perspective) Haggis' quitterama is. A few nights ago, on ABC's Nightline, effete Scifitology flak Tommy Davis walked off the set of his interview in a huff.

I just bought a copy of the Heath ledger/Jake Gyllenhaal flick for a $1 at a sidewalk sale last weekend. While I don't know when I'll watch it again, I definitely will never see Crash. Hollywood gossip is that while it's a given that many of the older more conservative academy members don't care for gay movies, others pointed out that Crash's promoters (aka other Scifitologists) sent out screeners of Crash in droves right before the Academy voting deadline. 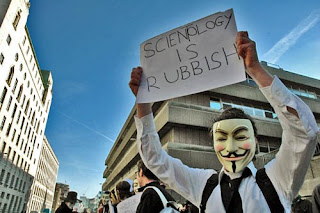 Recent protests at Scifitology centers have been organized by the group Anonymous, who don Guy Fawkes masks made popular by another film, V for Vendetta.

Apparently, Scientology, Haggis knows how to quit you. Maybe Haggis can give his Oscar to Ang Lee as a form of protest. For now, his high profile protest may be the straw that breaks the cult, excuse me, camel's back.
Posted by Jim Provenzano at 5:12 PM