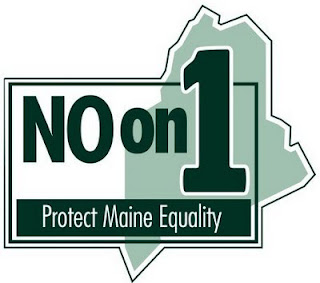 
Gay-Marriage Activists Look Ahead After Big Defeat in Maine
by Michael A. Lindenberger – Wed Nov 4, 10:20 am ET

Mainers' 53-47 vote to reject gay marriage does more than simply slap down a law that just six months ago had made Maine America's second state to permit same-sex couples to wed. With voters thronging to the polls, the closely watched - and ultimately not very close - vote extended the winning streak of gay marriage opponents nationwide, who have now prevailed in more than 30 straight state elections over whether to allow gays to marry. Just like Californians one year ago, Maine voters insisted on having their own say on an issue that simply will not go away.

Watching the results come in at the historic Eastland Park Hotel in downtown Portland, Scott Fish of the Stand for Marriage Maine campaign told TIME the other side had acted with too much haste, and too little respect for voters' wishes. "What's the hurry [for gay marriage]?" asked Fish, whose group began seeking a so-called "people's veto" almost immediately after Maine's Democratic (and Catholic) Gov. John Baldacci signed the gay marriage bill in May. (See a visual history of gay rights in America.)

But Maine's vote, much like all of the states before it, including California's vote on Prop 8 12 months ago, will do little to slow the fight over gay marriage. Not in Maine, where Tuesday's vote is only the equivalent of a veto and can be easily reversed by lawmakers when they next meet, and not in the rest of America, where the issue continues to roil courthouses and statehouses alike. "Ultimately this is going to have to have a national resolution," says same-sex marriage activist Mary Bonauto, one of the nation's top lawyers involved in the campaign to legalize gay marriage. "It's about aligning promises found in the Constitution with America's laws." A leader in Maine's campaign to uphold gay marriage, Bonauto is best known for arguing the same-sex case that led the Massachusetts Supreme Court to strike down prohibitions against gay marriage in a hugely influential 2003 decision that paved the way for that state to become the first to permit gay marriage in 2004.


At least Washington's gay marriage bill is ahead.

I'm so sick of this.And here's why, stated plain as ever from Jesse Ventura:

"You can't put a civil rights issue on the ballot and let the people decide. You have to have elected officials to who have courage to make the right decision. If you left it up to the people, we'd have slavery, depending on how you worded it." - Former Minnesota governor and pro wrestler Jesse Ventura, responding to Maine's vote on CNN last night. (via JoeMyGod)

Why doesn't HE run for president? Where is Obama during this?
Posted by Jim Provenzano at 11:43 AM