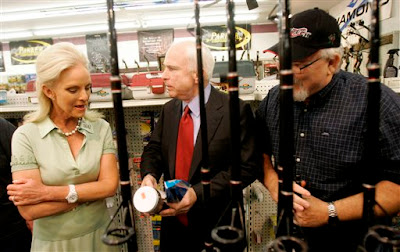 Republicans and guns; guns and Republicans. It's a toxic mix.

A gunman entered the Arkansas Democratic Party headquarters Wednesday and shot the party chairman, who was hospitalized in critical condition, authorities said.

The gunman asked to speak to the party chairman, Bill Gwatney, and fired three shots at the office near the state Capitol.

"He came in and went into this office and started shooting," police Lt. Terry Hastings told reporters near the party headquarters.

The suspect was chased into Grant County, south of Little Rock, and apprehended after being shot, the police spokesman said. The suspect's condition and motive were not known.

But I'll bet $10 it was similar to the rightwing freak who shot people in a Tennessee church because he despises "liberal values."

Yes, shooting rampages are the values Republicans adhere to, like the guy who had a weapons arsenal and was "detained" for joking about assassinating Barack Obama.

Even snake-handler and (preposterous) Repub. prez. contender Mike Huckabee made jokes about it.

The rightwing hatred will get worse. Wait and watch.

Across the globe, Georgia's attack by Russia may have stopped, but John McCain wants money and support sent there, pronto. Why?

Maybe it's because "John McCain's chief foreign policy adviser and his business partner lobbied the senator or his staff on 49 occasions in a 3 1/2-year span while being paid hundreds of thousands of dollars by the government of the former Soviet republic of Georgia."

Johnny's quite the Gun Ho, as are Republicans who like to shoot people with them.
Posted by Jim Provenzano at 12:57 PM