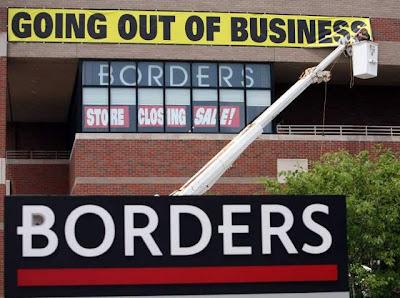 Borders bookstores are closing nationwide. This is sad news, but it's also predictable.

From the Detroit Free Press:

"The Borders sales started Friday at its remaining 399 locations, which include 259 Borders superstores, 114 Borders Express and Waldenbooks, and 26 Borders airport stores.

"This marks the end of an era," Edwards said in a statement."

Along with placing the blame on Amazon.com, ebooks, and the economy, there's another angle, that Borders' business practices toward authors was less than friendly, and more geared to a cafe culture.

Author Larry Correia posts about his experiences with Borders, and several expansive comments add to it with informed perspectives from former employees, major authors and fans.

It's easy to blame corporations like Amazon.com. But for me, it's about adapting to inevitabilities.

In the week since I published the Kindle versions of my three books, I sold more copies than I did at an average Borders store. Small, independently published just don't get shelved in chain stores very often. As a consumer, should one feel obligated to pay more at a brick and mortar store instead of paying less than a dolar online?

With independent bookstores, particularly local ones, shopping helps you, because you're keeping local businesses alive. But in times like these, a bargain is a bargain.

I've probably given away, donated or sold off more books than I now own. While I doubt I'll ever get so Zen that I only own 100 Things, the idea of getting rid of 100 things sounds great. 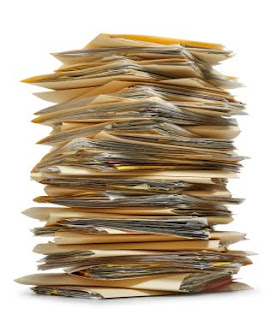 Among those things, for me, are a lot of old paper files, including my PR materials, which include a lot of print-outs of bookstores I sent promos to, or arranged reading events. In looking it over, I realized that the majority of these independently-owned bookstores have closed. Gone. The sentimental or archival value of this list may have value to someone else, but I have to face the fact that I can't be an archivist for an entire culture.

In another personal business aspect, I just got my annual invoice from my printer of PINS. They've been storing the files and negatives from the original print version. In converting the manuscript (I had to download a new version of Quark to extract the text into Word, then convert to HTML), I noticed some persistent typos that exist in the print version.

It's a bittersweet duty that I'll have in contacting the printer to let them know that the old-school files will no longer be needed. Frankly, I realize now that the fonts and layout are a bit antiquated. I'm happy to know that the Kindle version, and a new cleaned up manuscript, will be the legacy of that book into the 21st century.

So, basically, like a beloved rotary phone or Victrola, I'm throwing out the outdated versions of my work.